My last film “Happy & Gay” (2014) has completed its festival run, but it’s still is receiving some requests for specialty screenings. During the entire month of October 2017, it will be screened in the “Cabinet of Curiosities and Abilities” program at the SESC Itaquera Brazil, which is a social-cultural organization for São Paolo. A SESC educator is there to facilitate community conversation about the cinematic works included, which is quite intriguing and wonderful.

The film has been picked up by three different companies for international distribution. The most recent, Peccadillo Pictures (UK), has just released my film as part of a DVD shorts compilation titled “Girls on Film 2: Before Dawn.” They’re doing a good job of getting it out there and my film has had some nice reviews to start things off. Film reviewer Jennie Kermode, of the British film review site “Eye for Film” wrote up a thorough and thoughtful piece. Tim he “all things gay media” review site Big Gay Picture Show gave my film a super shout out for the DVD compilation review. 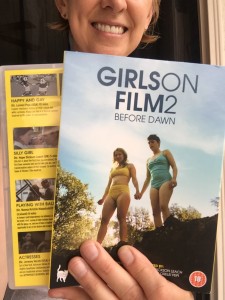 It’s beautifuly observed, and its sharp wit makes it a delight to watch.  Eye For Film review 2017

Happy and Gay is silly but very well done, perfectly capturing the feel of a 30s Merry Melodies-style cartoon. However, it gives things a smart, revisionist take, showing that life for some wasn’t that merry, as they were faced with homophobia, police raids and having to live in fear. It also subtly points out that while racism was perfectly acceptable to show back then, homosexuality wasn’t. A fun and entertaining slice of musical whimsy, which shows that sometimes things don’t change as much as we might think, even while they change a lot in other ways.  Big Gay Picture Show review 2017