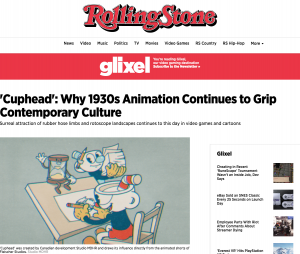 Rolling Stone magazine has an article about the contemporary fascination with vintage 1930s cartoon animation. The article is focused on the wild and creative era of animation, and my short “Happy & Gay” is brought in as contextualization, with animation artist and scholar Lynn Tomlinson bringing up and speaking to my film’s contemporary goals. (Check out Lynn’s great creative work by following the link.)

Lorelei Pepi, an American animation artist who focuses on issues of issues of identity and representation, used the same tactics in “Happy and Gay,” a short feature that imagines a 1930s-style cartoon world where queer couples were included in popular culture without being reduced to stereotypes. The short features a variety of stereotypes that were common at the time, including the Asian opium smoker and the effeminate “pansy.”

“It imagines a night on the town for gay and lesbian couples 1930s cartoon style,” says Lynn Tomlinson, an independent animator and professor at Towson University. “Of course, this nightlife did exist, but it wasn’t represented on screen because censorship and stereotypes effectively erased any positive representation of gay characters.”